From Guest Author Kyle Prue | I wrote The Sparks when I was just 16 years old.

My parents had taken away the internet, TV, and cell phones for the summer.  They called it “Summer Unplugged.”  Leave it to a couple of MBA parents to try and brand their latest idea for my siblings and I.  We were not thrilled about this plan as you can imagine.  I threatened to call child protective services, but my parents pointed out that I no longer had a phone.  Well played.

Anyway, their evil plan worked as I was so bored that I spent the summer writing and by the end, I had a first draft of The Sparks. It was published the spring of my senior year in high school. The Sparks was being featured on a blog tour with 56 stops.  This sounded great until I realized I was going to get reviews from those bloggers on launch day.  With all the work of editing and the incredible hoops to getting published, it actually never crossed my mind to worry about reviews. Until launch day that is.

Then I was in a cold sweat as I kept hitting the refresh button on my computer waiting for the reviews to come in.  I'll never forget the feeling when the first review hit and it was for 5 stars.  It felt like all that hard work–balancing school, swim team, mock trial and all the demands of editing– had all been worth it.

I'm still so grateful every time a reader takes the time to leave me a review and tell me how much they enjoyed the series. As a young author, it is really hard to get discovered within the millions of books on Amazon.  Reviews help readers find my books and help with rankings.

So the next time you pick up a book, whether it's by me, a self-published author, or a big name, think about leaving a review – it really does matter!

Kyle Prue is an award-winning author, actor, and comedian. Kyle wrote The Sparks: Book One of the Feud Trilogy when he was just 16 years old. The next two books in the series are The Flames and The Ashes (2018 release).

Kyle spent a year on a national book tour visiting over 100 middle and high schools and meeting over 80,000 students. Kyle is a student at the University of Michigan, studying acting and creative writing. Kyle is a popular keynote speaker at conferences and his assemblies are a huge hit with teens. To book an event, email Kyle at [email protected]

Kyle is the founder of Sparking Literacy, a non-profit dedicated to lowering the high school dropout rate by inspiring teens to read, write and follow their dreams. You can learn more at sparkingliteracy.org. An actor and comedian, Kyle trains at Second City Comedy Club in Chicago, where a number of SNL actors have gotten their start.

Follow Kyle on social media Facebook, Twitter, and Instagram. If you’ve enjoyed this book, sign up to receive our newsletter and enjoy a bonus chapter of The Sparks that has never been released. Members receive free gifts and updates about new releases. Join at kyleprue.com
If you would like to connect with other fans of the Feud series, join our Facebook group.

About The Epick Fued Trilogy, Book 1 The Sparks 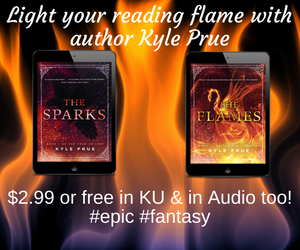 Find out why USA Today calls The Sparks “a crackling read” that “builds a vivid world (both) otherworldly and relatable.”

Neil Vapros just wants to make his father proud. The sixteen-year-old aspires to serve his family as an assassin, but he nearly dies in the process. As if that wasn’t bad enough, Neil’s family, as well as two rival dynasties, have abandoned an ancient promise to protect their city. An unknown evil has begun hunting all three houses from the shadows…

As Neil’s relatives fall one-by-one, he attempts to unite the three supernatural families against a common enemy. But earning trust after years of assassination attempts could prove impossible. Neil’s fight may involve more than a bloodthirsty empire, as betrayal rears its ugly head…

The Sparks is the first book in the award-winning Epic Feud trilogy of young adult fantasy novels. If you like captivating characters, inventive world-building, and supernatural battles, then you’ll love Kyle Prue’s action-packed coming-of-age tale.

“A crackling read. The Sparks builds a vivid world that is at once otherworldly and relatable. Characters spring from the page in a deft twist on mythology that belies Kyle Prue’s young age. He’s a voice to be heard.”  Scott Bowles, USA Today