What Novel Would I Write If No Novel Had Ever Been Written?

By Justin Fenech/ If I were to tell a fictional story, a lie, over a copious amount of pages, what would it entail, what would it involve? This is an almost impossible exercise. I cannot trust a single answer I might come up with, for it will all be laden with previous experience. Books I have read, books I have heard of will all filter in, corrupt the purity of the thought-experiment. But it must be tried.

Why would I write a novel in the first place? What function would it serve? Education? Entertainment? Enlightenment? Posterity? Looking back on why I actually began to write (and yes, I realise, this is not an un-biased thought) it would be a self-indulgent reason: to explore places and experience things that my life keeps me from. Be it travelling, relationships, times, characters I would never know. Is this entertainment? Not exactly. It’s not learning either. It’s journeying of a sort.

What is the function of these indulgences? Say I write a story about travelling back in time to see how my grandfather lived during WWII, what would I mine from that quarry? My choice of story would in a way be influenced by a question I cannot resolve. The story would be a virtual simulation, far-fetched but grounded, that forces me to confront a dream, a nightmare, a challenge, an ambition, better equipping me to decide how to act, what to think, how to live.
Now let’s edit the question somewhat: What Novel Would I Write If I Were The Only Person On Earth?

No one would ever read my stories, they would be stripped of the need to entertain or appease others. Would I write something to entertain myself, or to encourage me, motivate me? Or simply something to pass the time? (Can a novelist really entertain himself?) Or would I, seeing as how I’m the only human alive, find it necessary to invent humanity?

A thought suddenly comes to me: novels are means of making us appreciate what we already have.

Life is full of ambitions, longings, ennui. Imagine you suddenly became a millionaire; the world is your oyster, but you’re still trapped in a shell. If I were the only person on earth I would write a novel about being surrounded by others to make myself realise what a nightmare that would be, better to be as I am, surrounded by animals, silence and waves. If I were, now this is less abstract and more close to home, someone surrounded by people living in a big city on a small island, I would write about being on a deserted island without people, to make myself realise how much I enjoy the company of people.

The novel, then, is a vehicle for happiness. It is a filter that sharpens your reality. We are all of us born into our own time, place and corner of history. We might despise it, but it is all we’ve got. This isn’t to say one is not to have ambitions, not to want to break free; but before being a good migrant, you must first be a good prisoner. Don’t escape from your reality until you are absolutely sure it’s not the reality for you.

Returning to the titular question now, I must ask myself, would a novel that is so self-indulgent, so personal to my needs and quandaries, be of any interest, and any worth, to others? And more than that: should I take any steps to make it interesting to others? I am a human being, after all. Odds are that whatever preoccupies me preoccupies a vast majority of the species. I make no claim, indeed no novelist does, of being great, unique, uber-human. And if my novel were to be the first novel ever written, would it make other people write their own novels? If my novel is humanity’s ground zero novel, what would the new history of literature look like?
I bet the new literature would be more impressionistic. You would have a whole range of authors exploring the world through the vantage point of their emotional states. The storylines would not be that different to what we have now (human experience is mind-bogglingly diverse) but the writing would somehow be more philosophical, analytical, you would have less flippancy, there would be a more Socratic approach to novel-writing. Writers assuming they know nothing and setting forth on a journey of exploration.

It’s exciting to think what the Modernist movement of this hypothetical literary world would look like! How would they revolt against my ideas of novels and literature? Would they say that it’s too boring and begin writing more purely-entertaining works? Or would they say let’s be less selfish and not explore what we want to explore, but be more empathetic and write other people’s stories? I would argue with them that this is impossible. Even if you write the story of another, the themes you imprint upon their story will stem ultimately from you. Can there ever really be a truly selfless novel? Imagine a man desperately in love with a woman who isn’t interested in him: could he write for her the novel of her life, express her emotions, fears and excitements?

Then along will come the postmodernists and argue – writing novels shouldn’t be personal or empathetic, they should be universal. Write the story of a landscape, a place, an idea, a fish, a dog, a planet. We don’t just live with humans we live with our environment. And this is a tantalising idea. It is sufficiently primordial and primitive. But surely, novels can’t ever be completely devoid of humanity? That would just be anthropomorphizing, wouldn’t it? Don’t get rid of man in novels, just write novels about man within nature, at least!

So, having said all that, what would this first ever novel of mine be like?

I suspect it would be the story of a poor man who runs away from home, from the family he loves, and goes to try and make a life for himself in a far-off place, taking on jobs and challenges that make him a success, allowing him the freedom to make any woman love him, to drink whatever he wanted to, gamble, buy rare things, go star-gazing, fishing and trekking; only to have things spiral out of control and collapse around him, forcing him into a depression, a moral crisis that, in the end, would force him back home, back to where he longed to escape, this time happy to be where he was meant to be – a lesson against extremes. It would probably be called something un-pretentious and direct like: The Wayfarer, The Ends of Happiness, Spirals, or Disenchantment. It would be a literary novel, with an eye for detail, but full of the kind of action its author wishes to experience; fast-paced, brief but immersive. 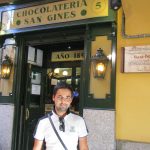 Justin Fenech a 28-year-old writer from the Mediterranean Island of Malta. He is the author of the novel Too Many Sparrows In Zaragoza and has had several short stories published in online reviews. His writing is inspired by the way travel inspires change in individuals, hows it particular brand of hedonism throws light on the most eternal of questions: what is happiness?