Writing Suspense: Meet Them in the Middle and They Will Come

By Guest Blogger, Donna Galanti: I’ve learned so much about suspense since writing my first book. One thing I’ve learned in fiction, and movies, is that surprise can be over-rated.

Surprise is the two-seconds of “Boo!” Suspense is the ten-minutes of “Oh, No! Will she die or not?” We’ve all heard go for suspense when you can–and for a reason. It keeps the reader turning pages.
This means the reader needs to know a few things (without giving it all away) so they can predict things, and feel smart. Readers love feeling smart. Don’t we all?

I’ve discovered that if we meet the reader in the middle and let them feel smart, that they will stick with you.

But how can we, as writers, meet the reader in the middle to create suspense?

Tease them with only a few descriptive details

In Harry Potter we all know what Hogwart’s Castle looks like, don’t we? But if you go through the book there are very few descriptions about it. It’s introduced only as a vast castle with lots of turrets and towers. When Harry enters it we’re teased with brief images of flaming torches and a magnificent staircase. That’s it. The reader must fill in the rest with imagination.

By giving the reader flashes of the setting here and there we involve the reader, take them along for the ride, and…build suspense.

Not just one, but many. Drop them here and there. Don’t make it tidy. Make it mayhem with meaning. But make sure those drops do have meaning.

If a knife appears hanging on the wall in the beginning, the reader will question why it’s there and believe that the knife has importance down the road. (So make sure you show its reason…later.)

Make the reader ask: What happens next? In Watchers by Dean Koontz we witness a depressed man who goes off to a canyon to commit suicide. Will he go through with it? Then he meets a highly intelligent dog and fears for his life from an unknown stalker. Through the dog he meets a timid woman he is intrigued by. Now we have more questions. Who is this dog? Who is this stalker? How are they connected? Who is this woman? Why is she so shy?

New novelists can often be afraid of revealing their best stuff early on. I used to feel the same way. There are tons of pages to fill, after all. That fear can make a writer hoard their best stuff for a surprise–later. But the reader can get bored with waiting, and surprises are overestimated.

Hitchcock, the master of film suspense, used this to build his tension in his movies. He gave the audience information the characters knew and didn’t know, such as the bomb located under their desk.

Will the character die? Yikes! Maybe, if we’re given all the information we need to suspect death is looming. What makes this suspenseful? Because we spend ten minutes hoping beyond hope the character we love doesn’t die! In the movies or on the page.

Look at the big picture

Movies can provide great visuals for how writers can create suspense. Multiple setups can lead to one big suspense payoff. It’s the knowing what’s about to happen, and then it happens.

In The Godfather, Michael Corleone plans to kill the two mob leaders he meets for dinner. We see the murder planning. The discussion of where to meet. The finding of the gun in the bathroom as a weapon. The wondering of whether Michael will or won’t do it. The knowing that his life will be forever changed if he does.

Creating suspense with a big picture buildup can also create surprise. Here is where surprise can work if everything that led up to the surprise is exposed in a new way.

The big moment at the end in The Sixth Sense isn’t just a surprise–it re-arranges everything we know about the events we’ve seen beforehand in a new way. Did you guess it coming or were you totally surprised?

Provide a suspense setting that creates feelings of heightened anxiety. Give the reader the portent of doom. The setting of a scene can make a large impact on its mood. Use sensory details to build on those feelings–a sudden wind, a stormy sky, a rising stench, a jarring noise. Use world building to create suspense.

Here’s an example of how I aimed for this in my paranormal suspense novel, A Human Element:

The sky darkened suddenly. She looked up. Black clouds, thick and angry rolled overhead. Her heart raced faster. The bad feeling screamed again inside her.

“Let’s go inside for now.” Laura tugged on her mother’s sleeve. They would be safer in the house. She just knew it.

“But we can’t let our chores go.” Fanny’s fingers flew across the peas. Slit. Pop. Slit. Pop. Wind whipped around the corner of the house. It knocked over Laura’s basket.

Do you think something bad is coming?

You’re saying whaaat? Yes. Slow down real time to show the full 360 degrees of the scene. In real life action happens fast. But it’s our job as writers to not show real life. That would be boring and over with in a flash. Show all the angles of the scene to build suspense. Use all the senses. Add complications.

I just read Robert Goolrick’s, A Reliable Wife. In it he moves achingly slow to build suspense. In the beginning scene a man waits at a train station. Nothing is happening. But so much is happening. And so much is to come.

His first paragraph tells us:

It was bitter cold, the air electric with all that had not happened yet. The world stood stock still, four o’clock dead on. Nothing moved anywhere, not a body, not a bird; for a split second there was only silence, there was only stillness. Figures stood frozen in the frozen land, men, women, and children.

Oooh, right? Look at his words. Bitter. Electric. Dead. Still. Frozen. Besides going slow he’s also setting the mood with his word choices. These are not soft words. We have a sense of doom. For eleven pages at the train station Goolrick goes slow to build suspense and tension all by focusing on one man’s thoughts and the people who flow around him.

And don’t forget to create characters to care about

This doesn’t mean they shouldn’t be flawless. Giving them flaws makes them more appealingly human, but you won’t create suspense if nobody gives a hoot about your characters.

Suspense is emotional. It’s about revealing some, but not all.

And if the reader cares they’ll go out on that limb and meet you in the middle. Build it halfway to create suspense, and they will come. 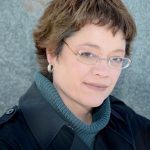 Donna Galanti is the author of the paranormal suspense Element Trilogy (Imajin Books) and the fantasy adventure Joshua and The Lightning Road series (Month9Books). Donna is a contributing editor for International Thriller Writers the Big Thrill magazine and blogs with other middle grade authors at Project Middle Grade Mayhem. She’s lived from England as a child, to Hawaii as a U.S. Navy photographer. She lives in Pennsylvania with her family in an old farmhouse that has lots of nooks and crannies, but sadly no ghosts. Visit her at www.elementtrilogy.com and www.donnagalanti.com.

Praise for the Element Trilogy: