On Rejection and Renewal: A Note to Aspiring Novelists

By Warren Adler/ You’ve spent months, perhaps years, composing your novel. You’ve read and reread it hundreds of times. You’ve rethought it, rewritten it, and revised it, changed characters, dialogue and plot lines. Writing your novel is the most important thing in your life. It has absorbed your attention, almost exclusively. Both your conscious and your subconscious mind have been obsessed with it. You have read parts of it to your friends, family, former teachers. Most think it’s wonderful.

You have finally considered it finished. Armed with optimism and self-confidence, you obtain from the Internet a list of agents and begin to canvas. You agonize over whether to send your precious manuscript to one agent at a time or to a number of agents. You choose the first option. Just in case, you send it electronically, unsure of whether or not this is now standard practice. You have high hopes. You are aware of the massive changes in the publishing business, but have chosen to take the traditional path as your first option.

Weeks go by, then months. The agents are, you believe, reading it in the office, passing it around, deciding to take it on. You live on such hopes. Finally you call the agent’s office. They haven’t a clue as to who you are. Somehow, they are reminded and search through the piles of manuscripts in their office, find yours and send you back a standardized letter, perhaps out of politeness made to look like an original.

Well then, you tell yourself, it is only one agent’s opinion. You send it off to another agent. A letter comes back swiftly, similarly worded. You get bolder, send your manuscript to two agents at a time, then three, then every agent you can find. Nothing happens. “Good luck on getting published,” they tell you. “Not for us.” Sometimes there is a personal, scribbled note that says something nice and you live in its glow for days.

Years go by. You start another novel, but you are less optimistic now, less confident, unsure. You tell yourself you have not paid enough attention to the marketplace. You begin to analyze what is selling, what is not selling, what is being published. You read books on the bestseller lists and are certain you can do a lot better. You try to use these books as a guide to what is selling and you write accordingly. Nothing helps. You are continuously rejected.

You begin to read on various websites about how you can publish your own books and get them marketed on electronic venues. Some sites promise that they can get your book in front of movie producers for a price. Some say they have the magic to make you a successful career novelist, again, for a price. For even more money, you will be told how best to market your book. You debate the idea and as your pile of rejection letters mount, you give it a try.

You spend money. A book is produced in print on demand format and an e-book is created and placed on every electronic sales venue on the net. Your family buys copies and sends them to friends. It is even reviewed in publications that review self-published books, yet again for a price. There is a word or two of praise in the review and you send it around to the media and everybody you know. Unfortunately, there is little or no sales, no afterlife. Despite your confidence in your ability, despite the fact that you truly believe your novel is certainly worthy of publication, you feel the full impact of rejection and failure.

Still, you cannot shake the certainty or your talent. You write another novel. Perhaps a third. Perhaps more. You go through the same process. Again and again you are rejected. You begin to question your ability, your ideas and your talent. Is it a fantasy, an exercise in unrealistic aspirations? You are becoming embittered. Your dream is crashing.

If you are fortunate, your wife, husband, partner and family stick by you, continue to encourage your dream, help you keep it alive. Other realities begin to chip away at the dream. You have financial obligations. Your kids are growing up. You are losing out in the job market. Others are moving up in their jobs, while you are falling behind.

You feel lost, adrift. Rejection after rejection has beaten you down. You see this as the end of your world, the end of your hopes and aspirations. Your high hopes and self-confidence in your own talent is petering away.

If you’ve read this far without your stomach congealing, I suppose you are awaiting some prescription offering a magic pill for coping. Sorry, there isn’t any available your corner drug store, and you won’t find it here. Luck–that strange, illusive, heaven sent, burst of good fortune–has not fired a missile in your direction. Not yet.

You have three choices. The first is personal surrender. You’ve been on a fool’s errand following an adolescent dream. Time to throw in the towel and concentrate on your day job. At least you tried.

The second choice is postponement. You weren’t ready. You needed more experience of life. But you continue to believe it will come. Some talented people are late bloomers. Give the dream a rest. Wishing won’t make it so. There are enough popular clichés to give you courage.

Now, for your third choice, the clincher. It is not recommended for the faint of heart. Never give up. Never, never, never. It may be impractical, unwise, foolish, pure madness, but if you truly believe in yourself, your talent, your ideas, your calling, your personal mission, why not, as Lewis Carroll wrote, “go on until the end, and then stop.”

To do this requires a monumental ego, total self-confidence in your talent, and an unshakable belief that you have been anointed with the right stuff. You will require obsessive focus, singleness of purpose, a draconian ruthlessness and total devotion to a belief in your artistic ability. Fancy words, I know, but with the absence of luck, you will need these attributes to sustain you through the process.

What this means for the true novelist is that he or she must continue to soldier on, keep writing, keep trying, taking the increasingly painful hits of rejection after rejection until, well, until someone out there catches on…or doesn’t.

We are all waiting for Godot. Sometimes he comes. 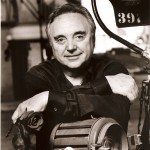 Warren Adler is best known for The War of the Roses, his masterpiece fictionalization of a macabre divorce turned into the Golden Globe and BAFTA nominated dark comedy hit starring Michael Douglas, Kathleen Turner and Danny DeVito. In addition to the success of the stage adaptation of his iconic novel on the perils of divorce, Adler has optioned and sold film rights to more than a dozen of his novels and short stories to Hollywood and major television networks. In recent development are the Broadway Production of The War of the Roses, to be produced by Jay and Cindy Gutterman, The War of the Roses – The Children (Permut Presentations), a feature film adaptation of the sequel to Adler’s iconic divorce story, and Capitol Crimes (Sennett Entertainment), a television series based on his Fiona Fitzgerald mystery series.Adler's forthcoming thriller Treadmill, is slated to be released in September. Learn more about Warren Adler and his Book Review Bonanza at www.Warrenadler.com