How I sold my very first novel to Simon & Schuster

It’s a question I get asked all the time: How’d you do it? How’d you find a literary agent? How’d you get a big New York publisher to bite? How in the world did you sell a book?

I used to run through the details for people—I gave it to this person who gave it to that person—and they’d listen attentively, and I could see them thinking about whether they could apply the lessons I was telling them to their own work. But after going through the story a few times I realized I wasn’t helping them. I’ll get to why in a moment.

But first a couple of facts: I sold my book last year to Simon & Schuster. The book is a thriller called The Ascendant, and it’s scheduled to be published at Christmas of 2013. It’s my first novel, but it’s in no way my first bit of writing. I am, by trade, a screenwriter. I’ve written for film and TV for many years now, rewriting studio films and getting rewritten, creating pilots for network TV and having most of them never see the light of day.

So, given my background, I had a leg up on other aspiring novelists. I already had Hollywood agents, and they helped me get a New York literary agent. I also knew quite a few other screenwriters turned novelists, and they in turn gave me advice and guidance. But in the end, none of those things—not my experience, not my agents, and not my friends—got my novel sold. In the end, I am convinced Simon & Schuster bought my book because of one, overriding reason…

…I had absolutely no plans to ever sell it.

I sat down to write my book with one idea in mind: to amuse myself. To write something that would excite me and only me. I was sick of writing for networks and studios and getting notes and being rewritten. I wrote my book knowing that the moment it was done I was going to self-publish it on Amazon. No one could stop me, tell me it wasn’t good enough, change this, change that. I was going to format it for Kindle and Nook, then upload it, price it at $2.99, and tell as many people as I could get to listen to give it a read.

And I wasn’t lying to myself either. I wasn’t telling myself I would self-publish, but deep in my heart I wanted the book to be bought by a fancy New York house. I was sick to death of having my writing kicked to the curb by big corporations. I was set on making myself—and only myself—happy.

And that was intensely liberating. I didn’t worry about what other people thought. I didn’t contemplate the book’s commerciality. I never gave my main character’s level of sympathy a second thought. I didn’t tone down the language, or bring up the sex, or highlight gratuitous violence. I just wrote what I wanted to write, and never once did I give a shit about the consequences.

And the result was, well, me. My voice. My take on the world, and no one else’s. The book reflects my obsessions, my politics, my fetishes, unabashedly and unreservedly. The writing is full of, well, my joy in writing. I’d had that joy beaten out of me, year after year in the movie and TV business, but writing the book brought it back to life. And it showed. It came through in the novel. The joy was apparent to anyone who read it. And so…

Now at this point you might be screaming—you said there was no way you were going to sell the book! But you did sell it! You’re a hypocrite! Yes and no. While I was writing it, I was convinced I would self-publish, and that conviction allowed me the freedom to write something that was truly me. Once I was finished with the book, I didn’t care anymore. I’d done the work. I’d said what I wanted to say. Now all I cared about was having as many people read it as possible. I knew that I had written it exactly the way that I wanted to write it, without compromise or second-guessing. That was all the reward I needed. Everything else was icing on the cake.

So I sent it to my friends, who liked it and urged me to send it to my agents. I did, and they liked it and urged me to allow them to send it to literary agents they knew. And so on and so on—the time-honored path that a book takes to find its way to a publisher. But that part of the story is generic. Anyone reading this can accomplish that task—find a friend with a connection, have them read it, pass it along, etc., etc.

Now, am I proud that S&S is publishing The Ascendant? You bet. We’ve sold it in a bunch of foreign territories, and the jacket design is awesome. But had no one bought it, and it was sitting on Amazon right now, available for $2.99 with grammar mistakes and a homemade cover, well…that would have been okay too. And how can I be so sure of that?

Because that’s exactly the attitude I’m going to take tomorrow morning, when I sit down in front of my laptop to start writing the sequel. 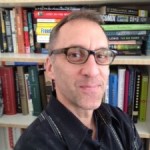 The particulars on Andrew: Half-Jewish, half-blue blood Yankee with a little Irish Catholic thrown in for argument’s sake. Literally, for argument’s sake. Married, two kids. Lives in Seattle, but goes to LA a lot for work. Seattle is dark and rainy but a good place to hole up and write for a living. LA provides an antidote to the gray of the Northwest. His wife and children provide all the rest. Andrew has worked as a screenwriter for movies and television, and his book The Ascendant will be published by Simon & Schuster late 2013. You can learn more about Andrew and read his daily musings at www.andrewdchapman.com, or follow him on twitter @andrewdchapman.