Where do characters come from? The basics of character development

Characters are an integral part of fiction. Without them, your novel can be likened to a soup that is just made of salt and water. But creating characters and their ensuing development are tasks that most writers struggle with (even me).

Before we jump into the topic at hand, let me ask you this: Do you think a surgeon would be able to perform a surgery correctly if she didn’t know the first thing about nerves, arteries or, at a more basic level, the cells making up the human body? Nope. The same thing applies to us too.

We writers can never come up with living, breathing, three-dimensional characters that seem to walk right off the pages, unless we understand what makes a real person tick—the emotions involved, the subtle body language given off in various situations and the dynamics of human relationships.

And so today we are going to discuss the basics of character development—where characters come from, or in other words, “the source”.

Every writer has done this: written themselves into their work. And yeah, it might make us smile now, but when we were nothing but little babies in the writing world, we all pooed in the writing diapers with a protagonist who is essentially us plus everything we wished we had in real life. That is an overblown superhuman character. And there lies the problem in creating a character that is in essence you.

On one hand you know yourself the best and so there is little need for a backstory because you already have the raw material (you), so you know what makes your character tick (again, you).

But on the other hand, if this characterization isn’t done properly, you will only end up with a clichéd plucky heroine or valiant hero who is invincible and thus would feel fake in conflict (because how can someone as strong as Superman be trapped in a rundown shack? Can’t he just blow it to hell and get out?).

My advice: Go for this source if you are absolutely sure that you can be objective about the flaws (in you/your character). Because if done well, this is the best source to tap from. Hey, don’t tell me I am the only lazy writer who doesn’t like to do an extensive back story for her characters.

2. Can I borrow your soul? The people you know

Unless you are a hermit and live alone in a forest somewhere (which brings the question how you have internet connection?), everyone knows someone who would make a delightful character. Come on, don’t tell me your mother wouldn’t make a good character. Mine would throw any reader off the couch in laughter just by being her quirky self.

But taking someone you know in real life and plunking them on white paper comes with its own brand of problems. One word: lawsuits. You wouldn’t want your best friend Bessy to sue you for one million dollars because you described her promiscuous past that was supposed to stay a secret!

But on the other hand, writing people you know is another easy way out of deep characterization. You already know these people and most of their past to base things on. And best of all you know their quirks; you know the funny frown that draws her bushy eyebrows together when Anna is in deep thought, or the telltale twitch in his little finger when Adam bluffs in poker.

My advice: Take two or three people you know in real life and take your pick out of their character traits—the ones you like the best and the ones you do not. You have now created a character that can’t be sued for money in a court and have its own best qualities and flaws like a real person. Just remember not to reveal any personal secrets of the people you are taking inspiration from (that’s betrayal, my friend).

3. Inspire me: People you don’t know

I haven’t done this too much, but every now and then this thought does strike me. And there lies the main thing. At times inspiration comes to us and we fail to recognize it. This is one of them.

When drawing inspiration from real life people you don’t know personally, always let your imagination run wild. Do you think the fat guy in the paper might actually be a master violin player who has found the way around playing with sausage fingers? Can the frail looking girl in the magazine with the pensive look on her face actually be a drug dealer no police would consider checking twice?

My advice: Look through some magazines or newspapers and stop at a photograph of a person that draws your attention but who isn’t Lady Gaga (yeah, don’t be a fan girl/boy now). And then give them a back story, a set of qualities, a few flaws, and maybe throw in a nemesis for free. And then run and write the character down.

The last source to get a character from is a source that is abundant but also the most dangerous to work with: your imagination.

Cooking a character out of thin air by the sheer force of your imagination is a heady thing. You will own that character, skin, bones and soul.

But just as easy it may seem to draw something out of your head, you must also understand the pitfalls of going down this path. For one, since the character is your brain child (your biological child minus the pregnancy) you will feel kinship to this character, whether it’s a hero or a villain. Maybe you wouldn’t even see them clearly (like a serial killer’s mom who still thinks her little Ben just fell in bad company).

My advice: Let your imagination run wild. There is nothing more beautiful than giving your thoughts the freedom to create as it pleases. But keep in mind a few points while drawing out this character—the back story, emotions, relationship with the world, best qualities and fatal flaws.

And most importantly, let them create themselves. Forcing your characters to behave in a way you want instead of the way they are sure to behave given their back story will only make them sound fake. Remember that just like we wouldn’t want our parents to dictate our life terms to us and turn us into slaves, we shouldn’t do the same to our characters/brain children.

So these are the four sources from where characters are born, whether he is the world famous Harry Potter or a lesser known Anita Blake. All you need to do is understand the basics and build from there.

How many of these sources have you ever tapped from? Did the results satisfy you? Do tell me about your own battles/victories/disasters when it comes to character development. 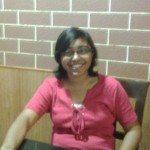 Ria Majumdar is a writer/blogger/undergraduate dentist. She is currently working on a novel named Rage based in a fantastical world inhabited by creatures called sprites. And she is guilty of turning her best friend into the villain of her novel. You can find her at her humor blog Spyglassviewer, which she updates four times a week.

Great post, Ria! As a writer, the aspect I focus on most (and am complemented on most) is characterization. Rather than assign a character my own traits based on convenience, I give each of them one of my personal flaws and then extend it like rolling out a ball of dough. The writing process can be brutal and lead to tears, but basing my characters on me, at least in this small way, always allows me to tap into their humanity and to relate. As I’ve told more than one reader, “I’d rather you hate my characters than forget them.”

One thing that I am always paranoid about is to make sure that none of my characters look even remotely like people that I know. Not that all my friends are vindictive villains, but I feel like I can’t do them justice and I would always be tempted to make “them” do something weird…