What’s stopping you from achieving your dreams? Give your writing to the world.

Fear, self-doubt, too much concern about the opinions of others, lack of focus, and the lack of motivation are some of the greatest barriers preventing you from fulfilling your literary dreams. Neither the lack of money nor the lack of time can compare to the power of these and their ability to paralyze you and your writing.

I’d like to encourage you that NOW is the time to let your literary dreams breathe free!

The same forces were paralyzing me and my writing before I began ambitiously working on my upcoming novel To Breathe Free. Inside I had the same urge that all writers have. My heart told me: “There’s a story in you, one that needs to be told in a book.” My heart kept repeating this over and over during the past few years. Something like the lack of focus would prevent me from listening. Or if I did listen and attempted to get the story written, I would quickly become frustrated at what I created. My heart still kept insisting, but the rest of me was drained of motivation and desire.

I went through the motions of living and was without direction in all areas of my life, including my writing. And as you know, if a writer cannot write, they cannot properly live.

It was during these many months that my grandfather passed away. Losing him added to my negativity, but solace, inspiration and that tiny spark that grew into the massive fire now in my belly were found in what he left behind.

Buried at the bottom of one of my grandfather’s drawers, underneath the “things” that don’t matter when you’re gone and hidden in the dark, was a collection of poems my grandfather wrote decades ago. The papers upon which the poems were written had been folded and were yellowing, and the pencil they were written with had begun to fade away. The poems each had their uniqueness and power, but the one entitled “Is what I am Where I am” has been my greatest motivation since reading it.

“Is what I am Where I am” expresses my grandfather’s dream to have his writing reach and touch readers. The moment I read his words, I felt the spark ignite inside of me, and I knew what I needed to do.

My grandfather never had the opportunity to publish his writing and reach the readers he dreamed of. This showed me the preciousness of our time and the urgency of getting my words and that story in my heart on to paper. And it also compelled me to become responsible for helping achieve my grandfather’s literary dreams.

With this new direction and desire, I began writing my novel and incorporating “Is what I am Where I am,” along with a selection of my Grandfather’s other poems, into the foreword and within in the novel’s story.

In my grandfather’s time, fulfilling literary dreams such as our own would have meant years of pursuing a publishing house and required plenty of hope and a prayer to get through the big gate out front. But now, independent e-publishing offers an alternative and just as respectable route to achieving our dreams. It’s going to be a ton of hard work to get my novel to readers—heck it already has been—but our dreams are in my hands.

So to you, the writer paralyzed by fear, self-doubt, the opinions of others, and lack of focus and motivation, don’t keep your writing stifled. Let your literary dreams breathe free.

At the very least, just get your words down. Get through that first step. Though my grandfather never published his writings or reached readers, he was able to reach me, just through the act of putting his words down on paper. If he hadn’t, I wouldn’t have known of his literary passions and dreams, and I would have been lost.

*Writer’s note: I would like to take a moment to acknowledge the late and amazing Emma Lazarus and her poem “The New Colossus,” from which I drew inspiration for my novel, its title, and this post.* 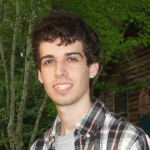 Andrew is the author of the upcoming novel To Breathe Free, which follows a young narrator around Manhattan as he relives his family’s past—a past in which his family strives for the American Dream while struggling against abandonment, the Great Depression, war, fate and time. To learn more, please visit Andrew’s website here: www.tobreathefree.com. *Note: To Breathe Free is not intended for anyone under 18. It tackles difficult subjects such as racism, war, poverty, and violence.

Thank you Leah! I’m glad that you enjoyed my post and my Grandfather’s poems. I hope that his writing and dreams can inspire others.

You’re welcome! I’m so glad you enjoyed it.

Hi Andrew,
That was lovely. And you have done what your grandfather wanted–you have made him a published author and given us a chance to see his words and to be remembered–through yours. Best,
Ava

Thank you Ava! You’re very kind. Even if my novel doesn’t become a success, I’ll be very happy with the fact that I still got my Grandpa’s writing out there to a few readers like he dreamed of.

Hi Andrew, I enjoyed this and good luck with the novel. Your grandfather would have been really proud if he had somehow known what would eventually happen to his writing. My second book is called PAPER DREAMS: we all need to dream.

Thank you Phyllis! Though I’m sad that my grandfather never had the opportunity to make his dreams a reality, I’m happy that I can.

Thank you all for your kind replies and words of encouragement!

Thank you for your kind words! I’m glad that I included an image of my grandfather’s writing. I was going to retype it but I felt it was important to see his handwriting.

Thank you Judith! I’m so happy that this inspired you. I know that my Grandfather wanted his words shared with others.

You’re welcome Suzanne. That is wonderful what your friend is doing and it’s great that she gets to enjoy creating the book.

Thank you for writing in!