How to be a good peer critic or beta reader: Tips you don’t want to miss!

This is a guest post by Jessica Joelle Pigeau

Online peer critiquing has many advantages to an aspiring author. It's accessible, it's relatively easy, and it allows criticism to take place in a more neutral, more impersonal setting, which to a degree lessens the strong emotional impact that criticism of one's work can have. While most peer critics lack the experience of a professional editor, they are free, willing to spend some time on one's work, and capable of articulating a response more complex than “it's pretty good, I guess” or “I liked the guy with the moustache,” which is more than one's friends and family can usually muster. All in all, in can be a good way to get a second opinion on one's writing.

A major part of peer critiquing is reciprocity. One could say that human civilization runs on this idea, so this should come as no surprise. The primary reason people spend their time reading and responding to other people's work is that they themselves would like other people to spend a little a bit of time reading and responding to their own work.

It's as simple as that: a cooperative effort at mutual skill improvement. You scratch my back, I'll check your 1000+ page epic on anthropomorphic tree-sloths for typos.

To maximize the benefits of these exchanges, it is important that everyone involved learn proper critiquing technique and etiquette. Here are some guidelines:

If one is uncertain what divides a professional tone from one that is inexcusably lax, consider what would be an appropriate way to address a stranger or a professional such as a doctor or a university professor as compared to a friend or a classmate. Consider the following exchange:

Interacting with a buddy after a game of American football:

Interacting with the Dean of a university:

Dean: “You have made a great choice in pursuing higher education, and I am proud of you all.”

An important thing to remember is that this is not a personal relationship. One has certain obligations to the other individuals that are different from if one were communing with close friends. The other writers are not one's “pals.” I say this not to discourage fraternization and friendship, but to emphasize the following: treat the people being critiqued as fellow professionals, people deserving of respect and regard.

Good manners make one welcome everywhere one goes. Peer critiques are no exception. Say please, say thank you, perhaps introduce yourself. Remember that a critic does not have the authority of the author in the creation of the work. It is inappropriate to demand the author change anything; instead, one must make suggestions. If one does not understand why one must be polite (after all, I, the almighty critic, am clearly right and the author should just do as I say), consider this: how would it feel if some looked at your work and said, “This is wrong, and this is wrong. You did this wrong. Change this immediately.”
It's very hurtful. Not only is it hurtful, it may make the author reject the advice or turn away from writing entirely. One shouldn't discourage others in this way. It is lacking in empathy and human decency.

Instead of bringing the author into the conversation, focus on the work being dissected. Instead of saying, “this is wrong,” try, “this doesn't work.” While generally unwanted in fiction writing, the passive tense may be of use here.
A redirected, passionless tone can be all the difference between saying, “This isn't working” and saying, “You suck.”

It is not simply enough to say that something isn't working. Try to explain why something is an issue. For example:

Good: “This thing with the sloths and the bears doesn't make sense.”

Better: “This thing with the sloths and the bears doesn't make sense because inter-species copulation cannot produce viable young. Also keep in mind that the world is probably not ready for a sloth/bear love scene, no matter how understated and emotionally moving.”

It is also highly important to give context for criticism, such as excerpts of relevant text, so that the author knows exactly where the problem area is located. Remember, there are a lot of barriers to communication found in text that we take for granted in face-to-face contact. Try to be very clear in what is meant.

Well, those are tips on how to be a good reviewer, but how to get good reviews in return? That's a tough one.

My first suggestion would be to create a small group of trusted connections. Go to people who will accept one's advice and give good constructive criticism in return. It may take some time to find these people, but once they are located, take time to build a relationship with them, and pay special attention to reviewing their work. That's smart social interaction 101: Spend more time on people who are worthwhile and less on people who aren't willing to give back or are insufferable about the whole thing. 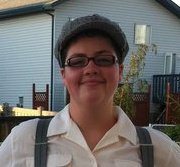 This is Jessica Joelle Pigeau, known in some circles by the nom de plume Joelle Pigott. She started as a peer critic after a friend suggested they start a critique site together three years ago. It sounded like a jolly good weeze, and she's been at it ever since. Ms. Pigeau is an anxiety ridden social outsider who enjoys long walks down the beach and hyperventilating in the fetal position. She is extremely fond of other languages and speaks four with varying degrees of fluency. Her personal blog is located here: https://jessicajpigeau.blogspot.ca/ And some of her non-fiction writing is over here: https://suite101.com/jessica-pigeau She's also on twitter with the handle @Iamnotalungfish Feel free to contact her at any time, as she has yet to catch on that she's not supposed to talk to strangers.