Why independent bookstores may likely be the last ones standing

Many years ago I worked in one of the better independent bookstores in Boston, called The Book Exchange, on Charles Street.
Then I went to work up the hill at Little, Brown when they were still in Boston, eventually to head off to be part of a start-up publisher. I ultimately left publishing all together and careened straight into the jaws of death of 35mm photography (and later digital mapping software at the hands of Google's ad-supported mapping content model.)

Konica was closing down 4300 or so Fotomats in the early 1990s, those funny little drive-thru huts in parking lots that were mostly bought by FedEx. It turned out that even that tiny real estate was too expensive to sustain the standalone photo business. Kodak was scrambling to catch up in digital photo to unexpected West Coast competition while sinking under the weight of all that lost 35mm film, single-use camera, and photographic paper high-margin business. And we know what happened to them.

This begs the question: If something as mainstream as 35mm photography did not warrant a chain of tiny stores in parking lots, why would books warrant huge superstores strewn across our paved land?

I say they do not. In fact, I predict we will see many more closings of chain bookstore locations in the near term as the shift to ebooks accelerates.

But, coming full circle, what I like about this scenario is the ironic survival of the many excellent remaining independent bookstores who outlasted the storm from superstores and the internet. They can distinguish themselves through interesting, eclectic selections and by building trust with readers looking for a local reading guide and an inspiring place to mingle with others. Imagine how their sales will rebound without so many superstores in the mix.

Online bookstores own the hugest selection of books while the independent bookstores stay small enough to own the local market. Superstores are actually trapped in the middle and are, as a result, goners. Possibly they will follow the Wal-Mart model and move into “smaller large” stores, but that is a very expensive proposition. Just look at Circuit City and CompUSA as models for that challenge. Goners.

After attending the Book Expo last week, a trade show that years ago was filled with independent booksellers and independent publishers mostly missing nowadays, I think this may be the likely outcome. 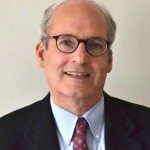 Caleb Mason is the founder and publisher of Publerati, an ebook publisher and literary agency specializing in literary fiction. An entrepreneur at heart, Caleb has been part of teams that have launched a start-up book publisher, new digital photography services, and award-winning software and consumer electronics' products. Caleb began as a bookseller before working at Little, Brown in both marketing and editorial capacities. He left to join the start-up Salem House Publishers, where he acquired and edited many titles and sold rights to the major book clubs. Caleb's book The Isles of Shoals Remembered was published in 1992 and he also contributed to BOOM, a marketing book. www.publerati.com.

This does seem more than likely.

What kinds of links do you think could be possible between indie books stores and indie publishers most of whose offerings are online?

True or not, it makes me sad. I love the big book stores — walking through them is so romantic to me. But that’s probably because my hubz & I both met while working at a Borders (oh, the irony). We love the small book shops as well, of course, but they are harder to find. Guess that just means I’ve got to work harder if I want to get that romance back, eh? Thanks for the insight! 🙂

Great analysis. There is just so much I have heard about the Indie book stores and I am also of the opinion that they should take a break.