Ahh, research: Don’t skimp on the details, but don’t overwhelm your reader either!

As the saying goes “the devil’s in the details.”

When writers of historical fiction put words to paper, they bear the responsibility to transpose their readers to the time period of their story. This doesn’t mean telling them it’s 1776 – it means transporting them to 1776, making them feel it, live it, and be a part of it – having them jump up and march along with the fife and drum.

If this is only done on the macro level, the characters are superficial and transparent. The reader sees through the ruse and doesn’t feel authenticity. To lift the characters off the pages and bring them into the minds and hearts of the reader, the writer must work on the micro level—down in the trenches – with the details. And here he must tread carefully, for it can easily be overdone. Too many details are overpowering and will bog a story down quicker than a hippo wallowing in molasses. Inserting a few carefully selected details, in a natural way so that they are not recognizable as being inserted, will unconsciously allow the reader to live them. This is where the writer’s art comes in to play, weaving the facts and substance of the era into the spirit and essence of the story, putting the reader into the story’s setting as a witness to the action.

For every word of detail the writer puts to paper, a hundred words were researched, reviewed and revised. Each sentence represents hours of background investigation, study, and learning about the times, people, environment and cultures of the era.

If a writer’s passion is the blood flowing through his veins, then research is the muscle that forms his flesh.

During the writing of Journeys across Niagara (formerly Bridges – a Tale of Niagara), I traveled down many roads of research. Not so much for the main story line of Kevin and his friends living in Niagara Falls during the ‘60s, (having lived that era myself – I was my own research), but for the historical stories embedded in the novel. Encompassing four actual events, covering over 200 years of history in the Niagara Region, and crossing lines of culture, nations and habitat, each story required a separate journey of research and investigation. The stories are separated by many decades in a rapidly developing part of the New World undergoing major political, societal and cultural change. The world of the English drummer boy and the Iroquois brave in 1763 was a different world from the world of slavery and abolition found in Lizzie’s story of 1859. Conversely, the Hermit of Niagara lived on top of Niagara Falls in 1831, while the only instance of Niagara Falls stopping was in 1848, a mere 17 years apart. Despite this relatively close historical proximity, significant changes had occurred in the Niagara Frontier between these two times due to the advent of the Erie Canal and the introduction of the railroads along with a spreading population, radically affecting the culture of the people.

Research is the mantra of the historical fiction writer. It is hard work and takes considerable time but it is as crucial to success as the re-entry heat shields are to the space shuttle. I often wonder how earlier writers researched their subjects and eras. (hmm, could be a story there in the making.)

“To where do we go?” the writers asked. They went to the libraries and to building personal acquisitions of books and writings. Yes, long, hard, tedious work, not to mention costly, but worth the effort and cost.

Today, all that’s changed; writers have the advantage of the internet. Call up any subject or key word and information is immediately at your fingertips: images, words, histories, background, essays and opinions—lots of opinions. This is a huge advantage for the modern writer, but I also see a snare lying in wait for us. As wide and as deep as the internet is, it only coughs up what someone has put in it. And those things are repeated over and over. The internet fools us into thinking we can click on any subject and then magically and instantly become ‘well-informed’ and ‘all-knowing’ about that subject. It has the potential to inject an entire population, on a global scale, with a ‘one-click’ mentality regarding any particular subject.

That’s one scary thought! The same singular knowledge and information is put out and repeated to all who punch in a keyword or subject, and most inquiries stop at that level. Much of this information has already been filtered and is steeped in ‘opinions’ before we ‘surf’ through it, filtering and discarding along the way. We too easily fail to dive genuinely into the heart of the matter as true research demands. With enough repetitions and enough people reading the same things without rebuttal and opposing views and insights, we begin forming a global community of keyboard punchers who think along the same lines. And we then put our faith in it – “I read it on the internet, so it must be true.” There is a great risk of an unconscious ‘dumbing down’ of the entire world concerning any given subject of history – like-minded regurgitating with like-minded.

Understandings about people and events can easily become condensed down to a singular ‘common’ or ‘general’ opinion, and we all know that there is nothing ‘common’ or ‘general’ concerning people. People are unique, diverse and always at emotional states with one another, whether loving or hating one another. And history is nothing more than a reflection of those people and those emotions. And make no mistake about it, we must fully understand and know all the details of history or the past will overtake the future.

Think for a second about what power true censorship would have over this medium. The world’s understanding of history would be revised and reshaped to conform to the political or social designs of those doing the censoring. This isn’t fantasy or paranoia talk, for we know all too well that such things have happened down through history by governments, religions and organizations burning, rewriting and revising history for their own purposes and agendas. It’s not inconceivable or preposterous to think it could happen with the internet and we mustn’t be complacent– for there are governments, around the globe, imposing censorship and monitoring the internet as I write.

True research goes beyond the internet and dives into the heart, fiber and cellular DNA of the matter. We, as writers, owe it to our readers and to those who went before us, to embrace research with both arms wide open, welcoming the joy of bringing history to life.

“To where do we go?” the writers ask. We go to the libraries and to building personal acquisitions of books and writings. Yes, long, hard, tedious work, not to mention costly but worth the effort and cost.

Gee – I guess not all that much has changed after all. 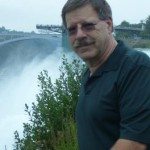 Born in Buffalo and raised in Riverside/Blackrock, I graduated from Riverside High School and spent time in the military, serving in the Army. Returning from Southeast Asia I earned my college degrees from New York State University and settled down to raise a family in Western New York. It was during this time that I learned of the beauty and splendor of the Niagara Gorge and came to revere and love the glory of creation as given to us through the Niagara River. Although I have always loved writing, most of my writing energy was expended on technical manuals and papers. However, after publishing a number of short stories, I revised and published my debut novel Journeys Across Niagara, entering the writing arena for personal satisfaction and for your enjoyment. I would like very much to hear from you through WordPress, Twitter, Email, or Facebook.

At the Tucson Book Festical this March, I listened to Ruta Sepetys describe her research for her book “Between Shades of Gray.” Her historical novel is about a young girl sent off to one of Stalin’s Siberian camps. Sepetys’ description of her research in Lithuania was a gripping story in itself. When she interviewed people who had been in the camps, she wasn’t just getting her facts and dates straight; she was building her story.

My husband likes to say that Wikipedia gives people a place to jump from… but really, is that not more truthfully Project Gutenberg or your regular library? People have to remember that the internet and all the information contained in its many branches constitute merely ONE tool in the writer’s toolbox. And it isn’t usually the best tool for the job…