See your words come to life: 5 tips on writing for the theater

The Theatre.* In many ways it seems as mysterious and closed a world as that of top-flight novelists. Yet writing a play isn’t something that needs to be left to serious types in cardigans who smoke pipes, or flouncy ruffled-shirt-wearing Theatrical Major students with angry diatribes about INSERT CURRENT TOPIC HERE.

YOU can write a play. Here’s a secret: it’s not hard. You may not be the next Chekhov, or the next Pinter, but so what? Some people go to the theatre to be entertained, and there’s nothing wrong with writing a play that’s entertaining rather than challenging or a searing indictment of this, that, or the other.

So what are the top five things you need to know about writing for the stage?

1. It’s drama. If your script is about two guys in a room arguing about their college theses, then you need to find a way to get some movement, some action into the situation. There’s nothing wrong with a single location, but you have to remember that you don’t have close ups or flashbacks or cutaways to rely on, like they do in TV programs. You need to give the audience something to WATCH as well as something to listen to.

2. Location, location, location. Think your story through and do an outline. Then look at it and imagine how it can be presented on stage. Changing locations is certainly possible, but if you present a potential director with a way of accomplishing the location change, they are more likely to buy and produce your play. For example, if you want a couple to start an argument in the kitchen and continue it in the bedroom, can you have a split set, with one half of the stage being the bedroom and the other half the kitchen? If you then have to move to the wife’s office, can the bedroom set be changed while the couple are back in the kitchen? Set changes can be tough, and most audiences won’t sit in blackout for longer than thirty seconds. Try using scenes in front of the curtain to cover a full set change behind the curtain.

3. Consider your actors. A play I wrote got sent back to the drawing board because I hadn’t realized I’d put the leading actor onstage for every single scene. Writing for Community Theatre, like I do, it’s best to give actors some time off the stage to catch their breath, glance over their lines, have a break. Equally, don’t expect them to breeze offstage in a wedding gown and return thirty seconds later in a business suit. They’re actors, not Clark Kent in a phone booth.

4. Have a read through. Plays are all about dialogue, and there’s no better way to check if your characters sound like real people than having real people read your words. Read-throughs can be great fun, as long as you check your ego at the door. Remember, you’re listening for errors, so don’t cringe when you find them–make a note! And listen to people’s opinions of the play too. They can tell you if the character they were reading has nothing to do in the second act, or if they felt that the plot has a hole. You don’t have to accommodate everyone’s idea in the next draft (unless you’re writing a commissioned piece, which is a whole other can o’ worms…) so you have nothing to lose by listening and thinking about what you hear.

5. Join a local theatre group. Yes, you may prefer writing to treading the boards, but I’m going to wave the old adage ‘Write what you know.” It’s a tricky phrase, as I’m sure you already know, but in this case it can be very helpful. Writing a play can be enormously liberating. You can accomplish all kinds of things on the stage, but the only way to find out what is possible is to be involved in plays. Going out to the theatre is a good start, but it can be expensive. If you join a local theatre group there are several advantages: They’ll be pathetically pleased to see you. You can ask questions about plays they have already performed and what made them good choices. You get a stock of people who can read through your work. You get a stock of people who can PERFORM your work. Your new group may even be willing to take one of your scripts to a one-act play competition, which could provide you with an AWARD to brag about. It happened to me.

So, those are my tips. The big secret is that writing plays is easier than writing a novel. When your protagonist is going to the drinks cabinet for a scotch, you don’t have to write:

“Tired from the constant battles with Cynthia over the custody of their pet otter, Alex slunk to the drinks cabinet and poured three fingers of dark, aromatic scotch into the crystal glass his Grandmother had left him.”

In your play, you just write “ALEX goes to the drinks cabinet and gets a scotch.”
See how easy that was?

Yes, there are formats you should use, but like any writing, that’s down to research. Make sure your character names are consistent, put a brief set description at the opening of each scene and note any exits or entrances your characters make. Once you’ve finished writing, add a cast list to the head of the piece so a prospective director knows how many people of which gender they’ll need to produce the play. You’ll be well on your way. 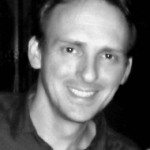 Damian Trasler has been a published and award-winning playwright for ten years, working mostly with TLC Creative (www.tlc-creative.co.uk ) and published through Lazy Bee Scripts (www.lazybeescripts.co.uk). He runs a Script Appraisal Service in conjunction with Lazy Bee and more theatrical musings can be found on his blog, www.dtrasler.com. He also raises three daughters while his wife has a proper job.

*I’m an Englishman living in Canada, so the “r” and the “e” are going that way round. Deal with it.

Some excellent, helpful points! Especially since I am reminded that this Script Frenzy month with the same people that give us NaNoWriMo in November. I will be referring to your article as I attempt to write for the theatre.

Thanks Deborah, and good luck with scriptfrenzy. A couple of friends have pointed it out to me, and I think the idea of a deadline is a wonderful way to focus. My first play was written under the gun because my theatre group needed it for a competition, and so we had to rehearse it, perform it at home and then take it to the festival. If I’d had all the time in the world, I’m a world class procrastinator, as I’m proving now!

Damian, Oh, I hear you on the procrastinating! During NaNoWriMo, I was way ahead of the game. I hate to admit it, but I haven’t started with ScriptFrenzy! I will aspire to be a success like you, procrastination aside! 😉