Day-time television teaches us how NOT to write: Important lessons in characterization, story-telling, and plotting

Fiction writers need all the tools they can find, but over time these tools can become dull and rusty. When this happens to me, I turn to daytime TV. Critics and viewers bash these programs, but I have a different spin on these shows. I find them, especially the soaps, to be very educational. I write Science Fiction and Fantasy fiction, and an exposure to these programs improves and sharpens my writing skills. How? By providing vivid demonstrations of what happens when a writer ignores the accepted dictums of the craft.

The soaps have a wealth of writing violations that can be exploited by both experienced and beginning writers as a whetstone to sharpen their crafting tools. I have no intention of disparaging the script writers for these soaps. I can’t produce a new script or story every day the way they can, and I have nothing but respect for their ability to do this. However, the necessity of getting a show on the air means they can revise their scripts only for a short period of time. I, on the other hand, can revise my stories as often as I want, over long periods of time. My early drafts are sprinkled with faults such as those I discuss here, but I have the time to weed them out before I submit them to an editor. This is an advantage I have over scriptwriters.

Using the soaps to fine-tune one’s writing skills requires a special technique. You have to listen to the TV, not watch it. By only listening, the writer will approximate the experience of a reader perusing a book. In other words, you will be using only a single sensory input, but it will be audible instead of visual. The danger in watching the screen is that is you will encounter a variety of sensations, including the spoken word, music, sound effects, and colors in the costumes and settings. These multiple inputs will prevent you from getting the point of the illustration. I have arranged my findings in three groups: Characterization Issues, Storytelling Issues, and Story Issues.

Memorable characters display a range of emotions just like people do in real life. The more emotions a character can display, the more life-like the character seems. In the soaps, the characters use two primary emotions: hostility and hysteria. A friendly greeting by one character is often met with a torrent of abuse from a second. It’s a rare occasion when a character’s dialog isn’t filled with argumentation, whining, or out-right threats. Listening to this dialog becomes irritating and demonstrates what a reader will experience if we writers use limited and repetitious character reactions.

These types of characters are inherently more interesting to readers than flat, one-dimensional characters. These latter types quickly grow stale and detract from other elements in the story. The soaps, however, specialize in single-dimension characters that never display any variations. Day after day, scene after scene, the characters remain as unchanging as the mountains. The same dialog, sentiments, and verbal mannerisms are endlessly repeated. Of course, on TV, the characterization may be rigid but the costumes change, as do the setting and the background music, so the repetition doesn’t appear as static to the viewer as it does to a listener.

Whenever the script calls for a strong emotion such as grief, terror, consternation, fear, love, dread, shock, or apathy, the actors whisper their lines. Apparently, this is a code to tip off the viewer that a scene of high tension or deep emotion is taking place. This ploy is especially useful to fiction writers because it demonstrates the effect of uniform emotional responses by the entire cast. It’s not very entertaining and neither will be a story that uses this unvarying approach.

Nothing is more boring to me as a reader than stilted and unnatural dialogue. Many novice writers have trouble understanding just what constitutes this type of dialogue, but the soaps provide countless examples. Characters lecture each other about an aspect of the plot that the entire cast already knows (as do the viewers.) Known as expository dialogue, it is to be avoided at all costs since the reader will instantly recognize it for what it is. Another facet of the soaps is that characters routinely give long-winded speeches punctuated with words that no one uses in ordinary conversations. Often the dialogue clashes with the character’s persona. For instance, a character portraying a poorly educated worker might suddenly spout large, obscure words that make a listener wonder if the character understands what he just said.

Writing instructors caution against giving a character a foreign accent. One reason is that it is difficult to be consistent with the accent from one scene to the next. A more important reason is that the accent soon becomes irksome to the reader. The soaps offer endless proof of this guideline. Many of the shows have one or more characters spouting dialogue with an accent so wretched it is amusing–for a short while. An alternative to these accents is to let the character use an occasional foreign word in the dialogue. The foreign word reminds the reader of the character’s background.

Clichés are the bane of writers everywhere. Nevertheless, the dialogue in the soaps drips with clichés. Every imaginable cliché can be heard on these shows, not occasionally but constantly. To listen to this smorgasbord of platitudes is to understand the prohibition against using them.

A good story has a plot that integrates the elements of the story and allows the reader to suspend her disbelief. In other words, the reader is willing to accept that the plot didn’t happen but could have. To ensure that the reader stays comfortable in her state of suspended disbelief, the writer must eliminate any trace of unbelievable events. These types of events will lurch the reader out of suspended disbelief and end the relationship between herself and the author. Yet the events in the soaps are incredible. A woman falls out of an airborne balloon, damaging her hairdo and nothing else. A long-lost object, the subject of a weeks-long futile search, is found by a character with a single phone call to an obscure part of the globe. To a TV-watcher, these incredible events do not stand out because the incidents are masked by the other presentation elements. By listening only, the plot flaws become apparent, as does the danger in writing a story with an incredible plot.

Good writing means a scene ends at a point that teases the reader into turning the page to see what happens next. The soaps, however, won’t give up a good scene without a fierce battle, even if the scene has reached its logical conclusion. The same plea/order/advise/command/request/chastisement is repeated for several days. In one soap, a female character held several others hostage and waved a gun at them for an entire week. Every afternoon she gave the same reasons for her actions in virtually the same words. It’s a wonder her hand didn’t get tired from holding the pistol that long.

To offset the soaps, the writer can listen (no peeking!) to Law and Order or one of its many offshoots. Like the soaps, these shows rarely have action scenes and are essentially all dialogue. Unlike the soaps, the characters show a range of emotions, speak naturally, and don’t use clichés. The plots are coherent, and the tension builds during the show. Contrasting one of these shows with the soaps can only serve to improve the writer’s craft.

So, with all these faults, why are the soaps so popular? One basic reason is that the soaps consist of a lot more than the written word. The beautiful people in the cast, the designer clothes, and the background music provide enough stimuli to hide a weakness in a single area such as the dialogue or plot. In contrast, we fiction writers can only use our words to convince a reader that our characters are worth caring about. We can’t use colorful or picturesque backdrops for the reader to see, we use no soundtrack, and the characters can’t model the latest fashion designs. The reader has to use our words to build her own mental images of the setting and the characters.

While the soaps and novels have very different presentation formats, the script elements of the soaps offer a method for fiction writers to refurbish their writing tools. I recommend a yearly exposure to a few soaps to eliminate rust and to apply a coating of lubricant to keep the writing tools in good condition. 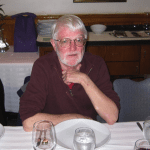 Award-winning author Hank Quense lives in Bergenfield, NJ with his wife Pat. They have two daughters and five grandchildren. He writes humorous fantasy and sci-fi stories. On occasion, he also writes an article on fiction writing or book marketing but says that writing nonfiction is like work, while writing fiction is fun. He refuses to write serious genre fiction, saying there is enough of that on the front page of any daily newspaper and on the evening TV news. Find him at www.strangeworldsonline.com.

I agree, Soap Operas are really cheesy with their scripts. I use to have my favorites, but when I realized how many rules were broken in the stories as they unravel, it made me cringe. That whole expository thing in the dialogue is the worst.

Thanks for pointing out these things. They are great reminders that we can learn from what is poorly written. 🙂

The soaps, even with the cringing, are valuable as refresher courses. We all fall into bad habits over time and dose of the soaps will help break the bad habits.