Seek and destroy: It’s time to eliminate poisonous verbs from your writing

We all know it, and I've said it before, you should always use the most powerful verb available instead of modifying a weak verb with adjectives and adverbs. Well, there is another category of weak verbs that have a way of creeping into your prose without you even knowing. These are actually some of the most poisonous verbs in your manuscript and you may not even know it. What am I talking about? Thought verbs.

Thought verbs are especially poisonous to manuscripts written in third-person point-of-view, so if you're a third-person kind of gal, like me, you may want to take notes. Thought verbs are, of course, verbs that express some form of thinking: thought, considered, imagined, sensed, assumed, believed, etc. (I will include a longer list of thought verbs at the end of this post.)

These are the verbs that should be grouped in with filters, but somehow never make the list. For those who don't know, a filter is a word that describes a sensory experience, like: felt, heard, saw, looked, touched, smelled, etc. Thought verbs should be grouped in with filters, but they're often forgotten, and to the writer's detriment. Thought verbs force a filter between your reader and your story.

In the first example, we have to try to imagine Gary imagining himself on a merry-go-round. The image of Gary pondering something is not exactly an exciting image. In the second example, you're given the image of him on the merry-go-round straight up with no filter; a much more powerful image. Who wants to read about someone pondering something? I want to read about someone doing something, and it better be something exciting, funny, or evil.

So, yes, there is yet another set of verbs to fear, folks. But don't let that worry you. With ‘Find and Replace' you can seek and destroy. Now, here is a more adequate list of thought verbs to avoid: 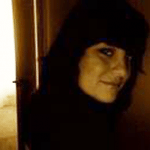 T.S. Welti is a single mother living in Southern California who writes books for children and teens. Her debut novel THE FIFTH SPECTER will be released on June 10, 2011. You can find her on Twitter and Facebook , or you can contact her via her website.

Thanks for this most interesting article – it certainly was a great help.