On Writing: One writer’s reaction to King’s crafty memoir

By dk LeVick/ In retrospect, it seems fitting there was a dark, turbulent storm in progress, that fateful day I entered the used book store (yes, there are still such things in this digital, e-book world).

The weather was dull, but my spirits were high. I had recently finished writing my novel, Bridges – a Tale of Niagara, ready and excited to ship it off to agents for my chance at literary fame.

Oh, how foolish we mortals are!

Back at that musty old book store, I quickly found my intended purchase. The storm continued to rage outside, and I continued to browse within the comfort of this almost-too-dry environment. Digging around, I wasn't too impressed with the cast-off fodder in the bin when, much to my amazement, I found a book by Stephen King—one of which I had somehow never heard.

How could this be? A Stephen King novel I didn't know about? And so old it was in the ‘Bargain Basement' bin of discarded paperbacks? I was shocked – how did I miss this?

The book was titled:  On Writing – A Memoir of The Craft

What's this? A horror story about a writer gone over to the dark side? Hmmm, “Craft”, huh? Must be about some writer who gets involved with witchcraft. Must also really be bad for me not to have heard of it, I thought.

Upon leafing through the discolored pages, I discovered it was, in fact, a horror story – it wasn't a novel at all but was a true to life monster story about the horror filled lives writers live, day in and day out, specifically, Mr. King himself. Wow! You mean he didn't come out of the womb already published on the New York Times Bestseller?

I paid my 50 cents and took the book home. It was still storming out.

That night, I read the book from cover to cover.

During the next two days – I read it again.

I found solace in learning of the great one's quest for recognition, to follow him on his roller coaster ride in writer's hell – making my own ride a little less frightening.

49 rejections for Carrie! Oh good – him too!

Suddenly, a breakthrough—acceptance, payment advances. With the royalty, the purchase of a badly needed used car is made, then the book’s sale is forgotten about and it's back to teaching English and other writing projects.  Until that one blessed day arrives, getting that life-changing phone call and being told to sit down by his agent. Then the six-figure paperback deal!

Isn’t this the scenario each and everyone of us dreams as we first set pen to page, as we finish the first draft of our first novel as we send out a vainglorious round of query letters?

How can a writer go wrong given the opportunity to absorb the words and lessons of this master storyteller as he puts to paper his experiences of the craft candidly showcasing his mistakes and reactions to them?

Whether or not you like Stephen King's works or his wider genre (and it's my opinion they're getting better with time) is immaterial to his skill and finesse in weaving a story and keeping the reader glued to his pages.

In this little book entitled On Writing – A Memoir of The Craft, he openly gives to any writer, anywhere, of any genre – a gift – a clear, concise, cut-through-the-BS gift about the craft of writing. It's not cluttered with pompous prose or dripping with self-worth (and he certainly could have done that if he chose to). Instead, it's a plain, down to earth guidebook, with a no-holds-barred – here's where you're screwing up – now go and fix it – instruction manual approach.

Of course by now, I realized my manuscript was a mess.

The first draft was 107,877 words. Foolish, I was rather proud of the discipline I had exercised in cutting 1,763 words between drafts one and two.

I went back to work.

I'm there now! No more – please – no more Dear God – have mercy on me! Then came the absolute hardest cut of all … and it was 88,374 words short… and I wept. Ohhhh- the pain! The agony! Take my leg! Cut my tongue from my mouth – only give me back my words!

All my wonderful words on the cutting floor – thrown away after such brilliant inspiration.  Only fellow writers know the pain endured. My great quotes thrown in the shredder, never to be gleaned by future generations!  When you're cutting this many words, you're not only trimming – you're removing entire plots, sub-stories and chapters.

I wanted to take a warm bath, lie back and slice my wrists like the old man under Federal prison in Godfather II.  It broke my heart. I was sure the world would be a lesser place without these discarded words.

21,000 words! That's an entire book of its own for crying out loud. Oh – how foolish we writers are to think we can know perfection.

Yes -21,000 mostly unnecessary words that added little to the story and did nothing except make me feel good about writing them. 21,000 words that did nothing to advance the flow of the story or more importantly – did nothing for the reader. Correction – they bored the hell out of the reader!

And that is what Stephen King's unassuming, little book did. Taught me to write for me. Then to put it aside for a bit. Then review it and edit it for the reader.

Lesson number two from Mr. King was that writing is not only about talent or inspiration, in fact, those attributes carry the least weight (or so says the man who is dripping with scads of both). Being a successful writer is about work ethic. We need the first two for sure – but they account for maybe 30% of the need and they give us our pleasure and satisfaction in writing. But, if our goal is to be successful at writing – then it takes work – work – and more work. Work requires dedication, commitment and stamina.

“I don't feel like writing today” just doesn't cut it.

In addition, for all us struggling writers, On Writing is also an encouragement to persevere through the rejections and crushing trampling of self respect faced daily as we drink of the bitter vinegar and gull that fills the cup we drink from. Knowing that the master drank of the same cup makes it a little more palatable for us.

I want to publicly thank Mr. King for sharing his experiences and lessons so openly with us; his pains and his successes with his love of the pen.

Among the reading community Stephen King is honored and respected as “the King” of story tellers. Among the writing community, for sharing this book with us, he's revered as our paternal saint.

You want to write a story? You feel the inspiration?  Have a tale to weave? Want to be on the receiving end of the six-figure phone call? My advice to you is write – write – write.  Then read King's little book and start over again. I can guarantee – it will, at the very least, urge you to press on. And if one little book can help everybody who reads it – then that's a five-star rating according to my system.

Since that stormy, woebegone day, I've acquired a shiny, new copy of the book that I review and use daily. The yellowed, musty smelling paperback book I first found so long ago has been preserved as something of a holy relic. 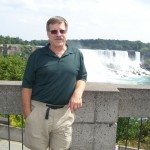 Born in Buffalo, New York; raised and lived in the Niagara Frontier. A US Army veteran and Graduate of SUNY with degrees in Instrumentation and Control engineering, dk has worked in the environmental field since its earliest days. The author of numerous short stories and has a debut novel out titled: Bridges – A Tale of Niagara. Dk loves the outdoors and writing about it.  Focused on making a living for his family, he wrote for myself over the years. Now he shares his thoughts and musings in his blog “Writing in the Woods.” Catch him on Facebook or send him a tweet. He’s currently working on novel #2.