By M.E. Summer/ Donde esta el baño is pretty much the extent of my Spanish speaking ability (and yes, I took three years of Español in high school), so of course, I want my nine-month-old to be fluent. That way I can save a bundle on translator fees when I take my llama trek through the Andes. Also, I find the idea of her cursing at me in a language I don’t understand kind of amusing. So today we are chewing on plastic multi-colored rings while watching soap operas on Telemundo.

And as so often happens when I’m chewing on plastic and watching incomprehensible television, my mind turns to writing. As the actors yell at each other, it dawns on me that watching shows in languages I don’t understand frees me from the plot enough to see how the story is being conveyed.

At first I had the inclination to write my own plot to accompany the on-screen action, but I quickly realized that the real story conveyed itself clearly through body language, expression, dress, and setting. This makes me think about those aspects of storytelling that encompass what some might refer to as a revelación.

So here are the lessons that telenovellas teach us about writing (translated into English, free of charge).

Maybe I’m the only one, but I can get pretty stuck in a body-language rut, as I mentioned in a previous entry about the infamous thesaurus. Shrug, eye-roll, blink, repeat. That being said, anything that helps me branch out into new expressions of body language is a huge plus.

This is what I’m watching right now:  A man distraught at a disagreement with the woman he clearly loves is looking down at the floor and pressing his eyebrows, sad and a bit overwhelmed. Thirty seconds go by and the woman tears up in the middle of yammering at him—not at the beginning or at the end, but in the course of telling him something about whatever it is they’re fighting about. Then she looks away, up and to the left, holding in a breath and biting her lip until she regains her composure. The tears are still there, she doesn’t try to wipe them away, but she does try to leave. He pulls her in close before she can get away, and then they’re suddenly kissing.

Very dramatic. Now imagine this level of body-language description placed strategically around dialogue in a story. It’s not only going to sink the reader into the action, it’s going to breathe life into the characters.

Lesson #2:  Dress and setting as narrator

Pan to the lobby of an apartment building. A pretty girl in a hot-tamale-red party dress is on her way out with a thuggish male in the background giving her the verbal shake-down about where she thinks she’s going with a neckline that low. (Okay, I made that up about the neckline, but that’s what I’d be objecting to if I were him.) Even if I had no idea what the word fiesta meant, I’d still get the connection of red, low-cut dress to party. It’s almost as if the writers of this show knew I’d be watching and that I’d need a visual cue about as subtle as a steamroller to get it.

But what’s more interesting to me as a writer is the immediate understanding I had about the relationship between the boy and the girl. The dress didn’t belong in the apartment building. It belonged at a party. Enter the frowning, loud-talking, wildly gesticulating male, and voila—instant clarity about the action of the scene.

The take-away from this is that choosing certain clothes, props, and settings can say as much or more about the plot as dialogue. Weaving in specific descriptors with specific intent can augment the action, making it even more clear to the reader.

So now the girl in the party dress has had her tiff with machismo male and is out the door and heading to the sleek car sitting at the curb with an equally sleek guy behind the wheel. Naturally, Macho follows her out to continue their argument. I look down for a few moments to gather up some more plastic goodies, and when I look back at the TV, Macho has his hold on Sleek’s hair and is yanking him back and forth by it.

Now, Oscar-performance material this is not. It’s intentionally clownish, despite Sleek’s wordless pleas and Party Girl’s outraged protests. The non-seriousness in this “fight” scene makes it obvious to me that we’re not supposed to hate Macho, and that we’re supposed to think Sleek is kind of a tool. Imagine if Macho were hitting Sleek over and over, yelling obscenities and not letting up despite Sleek’s obvious inability to defend himself. We’d have a much different picture of Macho.

What this says to me is that writing “they fought” in a scene is cutting the story (and the characters) off at the knees. You lose all kinds of opportunity to pull your readers’ sympathies in the direction you want them to go. Describing the fight is obviously good for putting the reader more thoroughly in the scene. But on a deeper level, we can pick and choose which actions occur to and by whom in order to lead readers to the conclusions we want them to draw about our characters.

Lesson #4:  Scene transitions for the win

Similar to action, calculated scene transitions can add value to your scene. If you’re like me, you pretty much end a scene when it feels over and you start a scene where there’s important information to convey. That’s all well and good, but in the telenovella world, it seems that scene transition plays an additional role.

So we cut away from Party Girl and back to the more serious plot-line of the distressed in-love couple. More about them in a minute. After this scene (and a commercial break touting the benefits of a miraculous stretch mark-removal cream) we return to Party Girl and her dueling beaus. But here’s the thing—they’re not dueling anymore. All three of them are in Sleek’s car sitting stonily silent. Macho is in the back, clearly refusing to get out and let them leave.

The last time we saw these three, we left Macho leading Sleek around by his thoroughly gelled curls. To come back to the three of them mutually sulking instead adds a layer of humor we wouldn’t have had if we’d witnessed them getting into the car. Nor would we have gotten that slice of humor if we’d come back to them still duking it out.

Intentionally choosing this as the scene transition increases our (or at least my) enjoyment of the scene and the characters. After this, I will definitely be making a pass at my manuscript focused only on optimizing my scene transitions.

And now back to the in-love couple. Julia is wrecked over Raul’s betrayal. Even though they’ve just kissed with the burning, fiery passion of a thousand suns, she pulls away and yells at him some more before running off to her apartment. At this point, I know that Raul is married and that Julia either just found out or she’s actually fallen in love with the cheater and now can’t bear to think of him with another woman (although I’m leaning toward the former since I kind of like Julia).

How do I know this? Honestly, I’m not 100% sure. I think it’s a combination of the way they’re both dressed (nice suit for him, conservative casual but cute for her), the obvious longing in their eyes despite the doomed finality they’re both expressing about their situation, the fact that they clearly live apart, and the fact that he seems to be the pursuer while she is running away. In any case, my theory bears out, as later we see him staring at a picture of Julia as another pretty woman comes waltzing into his ritzy pad with a bag of groceries in her arms.

I am pretty proud of myself that I was able to guess the situation correctly despite having no prior knowledge of the characters and no understanding whatsoever of the dialogue. But the truth is—the writers deserve the credit, even if they didn’t mean to include all that subtext. So again it becomes plain that the words we use to report action, to describe dress, to move through setting, and to convey emotion all play a role in what the reader perceives the story to be. And for me, this experience is a big neon sign saying: don’t waste it, amiga.

It is true that you don’t need Telemundo to do this. You can just as easily put your favorite show on mute and watch how it all plays out. But if it were me, I’d still be too distracted by the characters I know and the story I’ve learned up to the point I press the mute button to really get as much out of the exercise. Also, I’d miss out on the opportunity to turn my kid into the next UN diplomat to Paraguay, which would be a loss for everyone—don’t you think?

Now, if you’ll excuse me, I have to go order that stretch-mark cream.

For more on using television to enhance your writing technique, check out these fantabulous blog posts:

Do you ever use the boob tube as a writing object lesson? If so, what have you learned? Share in the comments. 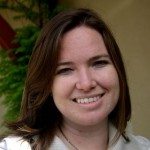 I know what you’re thinking. “I need another writing blog like I need a hole in the head.”  To that I say, have you really explored all the benefits of holey heads?  No?  Well, there are many, like you could keep a hanky in there. But this blog is not about that. It’s about writing, books, story, crafting literary masterpieces, banging my head against the proverbial keyboard, facing down the blank screen of doom, and living to tell the tale.

More about me: I write for a living. Not, you know, fiction, as yet, but I’m getting there. I’m currently working on a YA story about a girl on the grift. Until I finally finish the sucker and find some kind of publishing avenue, I keep the utilities on by writing online courses for various companies. If you want to know more about that, this is not the blog for you. If you want to know more about the noveling, then pull up a patch of carpet and let me tell you about it…

Need to up your writing game? Win a 6-month premium subscription to Grammarly here!

Lessons Learned: My 7 Best Moves as a Self-Published Author

I wanted to join a workshop that will enhance my writing skills since it’s where I earn a living and make money to support my needs and as well as my family.It’s my way of making myself responsible yet independent.