No, I’m not suggesting you write a story where the only characters are Ray Charles, Helen Keller and Marlee Matlin. Although, now that I think of it, that would be quite the writing exercise, wouldn’t it, to create a scene in which the three of them interact? 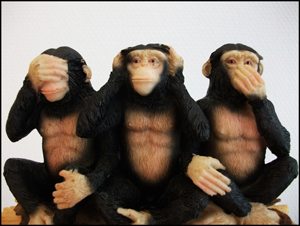 This is truly the essence of storytelling. Perhaps we should coin a new, more appropriate term: Storyshowing.

The first step in eliminating excessive telling from your story is to find all instances such as those I list as “triggers” below, and to replace them with sequences that show instead.

SAMPLE TRIGGERS: She heard, he saw, I thought, we listened, they noticed, she felt, he looked, I peered, we smelled, they anticipated, she observed, he imagined, I wondered, I knew, etc.

NOTE: Like all “rules” of writing, this is not a 100%-er. You may have occasion to use appropriately these phrases in your story. However, these should be the exceptions, not the rules. These phrases should trigger a self-review. How can you better show what happened rather than tell that something happened? I offer now a series of examples from pieces I’ve edited or reviewed. As always, I shall keep confidential the authors’ names and story titles to protect the not-so-innocent. 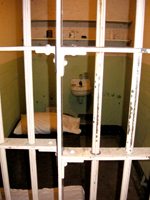 BAD: I could feel the intense heat radiating from the smoldering hulk. >>>>> Note: In a first-person narrative like this one, the author is clearly in the character-narrator’s POV. Thus, when he mentions “heat radiating,” the reader already knows it’s because the character “feels” it. Not only should the author not tell us (show us instead); Author doesn’t need to tell us. >>>>> GOOD (Simple): Intense heat radiated from the smoldering hulk.

BAD: She heard the crashing waves of an incoming tide and she saw the gleam of whitecaps under the stars. >>>>> Note: Not only does the author tell us that the character heard and saw, he does so in a wordy way. Note how, in the show-us-what alternative below, I cut the word count from the original 19 to a more concise 11. >>>>> GOOD (Simple): Waves crashed on the shore and whitecaps gleamed under the stars.

BAD: She saw a wound at his hairline, deep and ragged. She peered closer and didn’t feel the horror she expected. She saw a portion of the white skull. >>>>> Note: First are the various triggers: saw, peered, feel, and saw again. Second, “white” is unnecessary in “white skull”—everyone knows the color of human skulls. Third, although the scene teases at an intense, gruesome image, its weak construction fails to deliver. >>>>> GOOD (Detailed): A deep and ragged wound pierced his hairline, and a portion of his skull protruded from his scalp, laced by tattered skin and tissue. Horror lingered at the edge of her mind, yet the grisly scene compelled her to investigate closer.

BAD: He felt the wolf pack curl around him and his grandmother, and when he looked up, he saw his mother and his baby brother sleeping peacefully among them. >>>>> Note: We have the usual triggers here: felt, looked and saw. We also have redundancy: “he looked up” before “he saw.” Finally, we can trim back on the word count, from 28 to a more concise 19. >>>>> GOOD (Simple): The wolf pack curled around him and his grandmother, and his mother and baby brother slept peacefully among them.

BAD: “Come Fire,” he murmured before each life breath he blew. “Wake Fire,” he whispered as if into a lover’s ear and a timid crackle he heard. >>>>> Note: Set-up: The author uses “Fire” as a character, and thus capitalizes it as a name. The first thing that struck me was the length of the dialogue tags, which feel forced and awkward. By combining the tags into a single dialogue lead, the reader will better hear the tone of voice and emotion. Finally, the author ends with a classic telling trigger: he heard. >>>>> GOOD (Detailed): He murmured before each life breath he blew, as if whispering into a lover’s ear. “Come, Fire, and wake.” A timid crackle provided his first reward.

BAD: John looked at the sack with uncertainty. “I thought we would be attempting another animal first.” >>>>> Note: The first sentence, the dialogue lead, is a perfect example of where we writers must earn our keep. Most writers, and a fair share of editors, would think nothing of that sentence, and the author might be fine leaving it be. However, it is all telling. Now, let me make clear that some telling is fine, but you should always consider a situation like this an opportunity to engage the reader. The keys here are “looked at” and “with uncertainty.” The author could have run him through one or two brief mannerisms here—I’m talking about body language—that clearly shows John’s uncertainty to the reader. The telling is… well, dull; a little in the story is fine, but every reader has his own boredom threshold, so it’s always risky. When you show the reader, you pull her into the scene, you engage her, and that’s interesting for her. This author needed to stretch a bit. >>>>> GOOD (Simple): “I thought we would be attempting another animal first.” >>>>> Note: Yep, the author decided (rightly so) that the dialogue flowing between the two characters of the scene—their actual words—said all that needed to be said. The dialogue lead was unnecessary, and it interfered with the scene, so the author simply cut it—a good choice. However, for the sake of illustration here, let’s assume that he still needed to paint the scene and show John’s uncertainty. >>>>> GOOD (Detailed): John bounced his leg up and down and nibbled on his lip. “I thought we would be attempting another animal first.”

BAD: The lighting was dim and the only sound he heard was the piped in elevator music that played in a seemingly endless loop. He could hear Karen Carpenter’s “Close to You” over the relentless rain tapping on the ceiling of his cell. >>>>> Note: Note the weak word choices (was [2], seemingly, could) and the usual triggers: heard and could hear. Once again, the author should trust in the character’s (“he”) POV and just show the reader—paint the scene. >>>>> GOOD (Simple): Dim lighting deepened the sullen mood as piped-in elevator music played in an endless loop. Karen Carpenter’s Close to You accompanied the relentless rain that tapped on the roof of his cell.

When you allow the reader to experience your story at the instant your characters do, you make it possible for her to share in the emotion and impact of the moment. This mechanism, more than any other, draws a reader right into the story as though she’s a spectator at the scene. The difference may be subtle at times, the reaction hidden in the reader’s subconscious. Yet it’s often the key to making a reader say, even for reasons of which she’s not consciously aware, “I liked this story.” If you fail, she might instead say, “Eh, this story didn’t really do it for me.”