Since Harry Potter and Twilight hit stands, young adult literature has gotten more notice by both teens and adults. They turned the younger crowd onto a love of reading while showing the older crowd that just because something is dubbed “young adult” doesn’t mean it’s dumbed down and boring to read.

Young adult novels can be basically defined as books that are marketed towards teens and contain main characters between the ages of 12 and 18, sometimes reaching to early 20s. What young adult literature is not is a story that leaps into adulthood. The majority of the stories (short of maybe an epilogue set years in the future) take place during the characters’ teen years. They don’t typically deal with adult situations and problems such as divorce or financial troubles, etc. Also, a common misconception about young adult novels is that, because they are meant for teens, the stories must be immature and the writing poor. One only need look at authors such as John Green, Hannah Moskowitz and Maggie Stiefvater to see that those claims are false.

Along with the popularity of young adult literature have come the critics who want to pick it apart and dub what should and shouldn't be featured in books aimed at a younger audience. That’s a discussion for a whole other article, but I’ll touch on it a little after going over the typical components that make up young adult literature, such as narration and pacing, themes and appeal.

Young adult literature is often written from the first person point of view, an aspect that seems to be especially appealing to the young reader. It gives them a look into the mind of a character that is near their age and allows them to make a better connection and be more invested in the story. Young adult literature often lets us in so we can experience all those teen emotions and insecurities along with the character. For young readers, they find a friend of sorts, while older readers are able to reminisce about their teen years.

Along with the narration goes the voice. Young adult novels should have characters that are using slang and often talking in fragments. The stories tend to be dialogue heavy, frequently informing the reader about a character’s temperament whether it is through sarcasm, wit, or intellect.

Another common aspect of young adult literature is quick pacing. Most of the novels are plot driven with cliffhanger chapter endings and more action than sprawling description. The current blockbuster-movie-watching and video-game-playing generation needs stories that will move along at a good clip and keep their interest.

Some of the most common themes in young adult novels are about coming of age, self-discovery, and first love. They often also touch on typical teen aspects of being quick to love or hate someone or to have emotions that run rampant. Insecurities relating to body image and popularity are written in as well as immature behavior and a tendency towards the over-dramatization of events. Think about when you were a teen. Didn’t minor things seem like life or death issues? Many young adult authors touch on this in their writing.

Another common theme is the absent parent. I’m not quite sure why this is, but there are many young adult novels out there where the parents have either passed away, separated or just don’t seem to be around watching their children’s antics. It’s rare to find a young adult novel these days where the parents play anything more than a passing role, if they are there at all.

What is the appeal of a young adult novel that lures in a teen reader? Often the main characters are given a power of sorts over their situations, something teens may feel is lacking in their own lives, whether it’s the power to make their own decisions or love whomever they want. These novels put their characters into circumstances that a young reader can sympathize with and commiserate over. Even if the setting is fantastical and the characters are those with super powers, they are still going through some of those themes mentioned above–themes the young reader relates to. While it’s important for teens to understand the difference between fact and fiction, they can be comforted by seeing a character go through the same kinds of situations and troubles that they are experiencing their own lives.

To touch on it a bit, there is a lot a debate currently about what should and shouldn’t be allowed in a young adult novel. Many argue that the stories are too dark, too racy and too…real. There are a great many young adult novels containing drug use, date rape, physical abuse, suicide, foul language, and sexual encounters. Some complain that teens should not be subjected to such topics because they are at an impressionable age but, realistically, these are topics and situations many teens are experiencing on a daily basis. There are certainly ways those topics can be discussed and touched upon without being explicit and raunchy, but they shouldn’t be avoided entirely; let’s face it, teens are having sex, cursing and suffering through unpleasant situations. If any author is going to write about them, they ought to be written appropriately for the audience, in the voice of a teen, not an adult.

While young adult novels are going to feature teens and the situations they go through, they can still deal with difficult and age appropriate topics. The dialog may come off as “young” but that doesn’t mean the writing is dumbed down. The stories are relatable and fast-paced, keeping the attention of a young reader. They don’t always have a happy ending and can be complex and touching.

Teens should be encouraged to read books aimed at their age levels, and adults shouldn’t be ashamed to admit that they read young adult novels. Young adult refers to the age of the characters, not simplistic or immature writing. 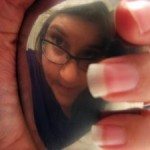 MB Mulhall is the author of the young adult novel Near Death and the upcoming release Tears of a Clown. She is also a budding photographer. When she’s not pecking away at her keyboard or looking at the world up close through her lens, she’s got her nose stuck in a book. A Jersey girl, born and bred, she spends much of her time scouring the boardwalks for images to capture and conversations to overhear. MB dreams of filling bookshelves with her own work and of plastering her walls with photographs she’s taken from places around the world. MB blogs twice a week at Keystrokes and Word Counts. You can also “like” her on Facebook, and if that's not enough you can always follow her on Twitter and see the ridiculous stuff she tweets about.